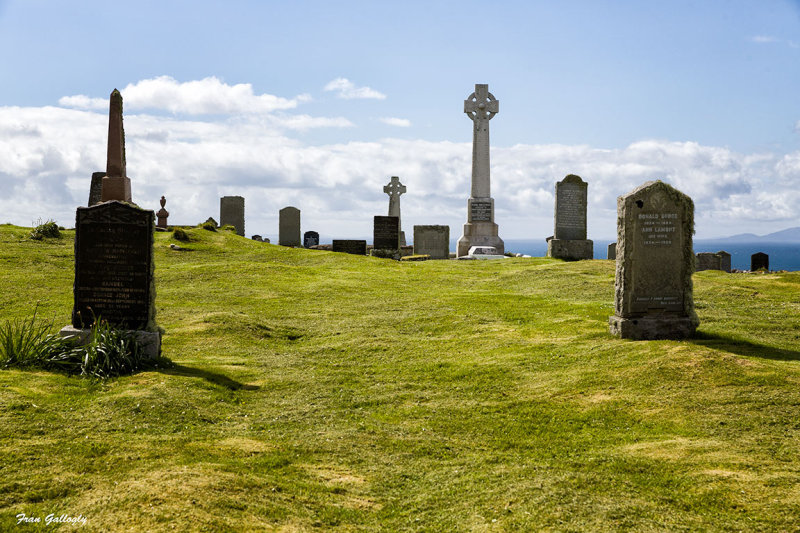 Sorry for this very long winded caption: Flora MacDonald's grave (tall Celtic cross) on the Isle of Skye. Flora was an eighteen century Scottish heroine. She led a very adventurous life for a woman of that decade...heck, for any decade. Her father died when she was a child and her mother was abducted. She was raised by the chief of the MacDonald clan, her cousin. At age 24, she helped Bonnie Prince Charlie escape from Scotland after the Jacobite defeat at the battle of Culloden in 1746. The prince, Charles Edward Stuart, had tried to seize the throne from the Hanovers and restore the Stuarts in what is known as the Jacobite uprising. Flora disguished him as her maid and helped him escape to France. She was arrested and put in the tower of London. She was released a year later and married Allan MacDonald. They had seven children. In 1774 they emigrated to North Carolina where her husband served the British in the Revolutionary War. He was captured and arrested and imprisoned for 2 years. Flora went in hiding as American Patriots ravaged her plantation and took all her possessions. She eventually was reunited with Allan in Nova Scotia. The MacDonalds returned to Skye in 1779 on a merchant ship that was attacked by privateers. She refused to go below and was wounded in the arm. Flora died at age 68 in 1790 and buried in Kilmuir Cemetery shown here. To keep the Jacobite legend strong to the end, it is said that Flora was buried in a shroud formed of a bedsheet used by Bonnie Prince Charlie. Her funeral was attended by 3,000 mourners who between them, it is said, consumed 300 gallons of whisky. The tall cross marking her last resting was erected by public subscription in 1880 and carries an epitaph written by Samuel Johnson. This reads "Her name will be mentioned in history and if courage and fidelity be virtues, mentioned with honour." There is a statue of her at Inverness Castle.