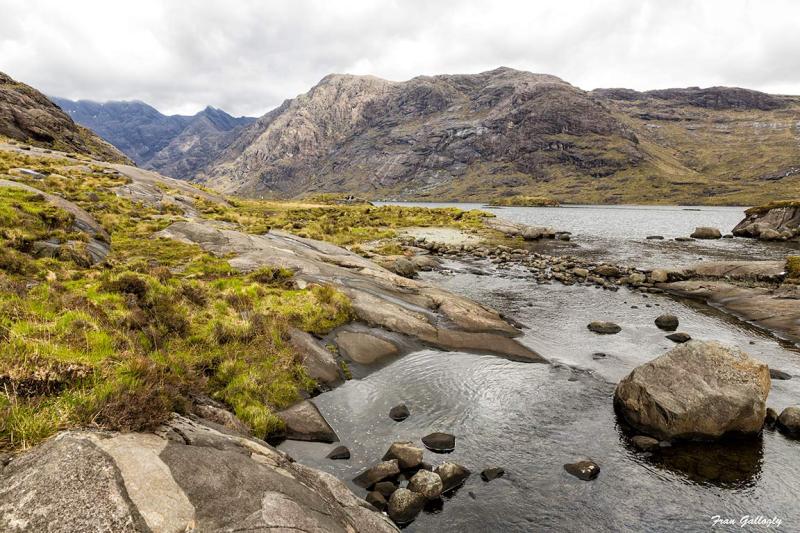 Loch Coruisk in the Cullin Mountains

Loch Coruisk in the Black Cullin Mountains, Isle of Skye. We took a Misty Isle boat from Elgol to reach this lovely loch at the base of the mountains. The loch also is accessible by foot from Sligachan (approximately 7–8 miles distance). It is also possible to walk from Elgol, but one section of the path (“the Bad Step”) presents some potential difficulties for the nervous or inexperienced.

The northern end of the loch is ringed by the Black Cuillin, often wreathed in cloud. From the southern end, the Scavaig River, only a few hundred yards long, discharges into a sea loch, Loch Scavaig. The loch is nearly two miles long, but only about 400 yards wide.

Loch Coruisk is also the scene of one of JMW Turner’s paintings, and a focus of the writings of Sir Walter Scott and Boswell and Johnson who were all struck with the beauty of the area while they travelled the Scottish Hebrides. Many have visited Loch Coruisk over the years, especially following the visit of Sir Walter Scott as a result of his famous description of the Loch.

That looks so peaceful, put your feet in the water and take a nap.:))

Wonderful detail in this fantastic scenery! Very nicely composed shot. I like the information you provided about this place as well.