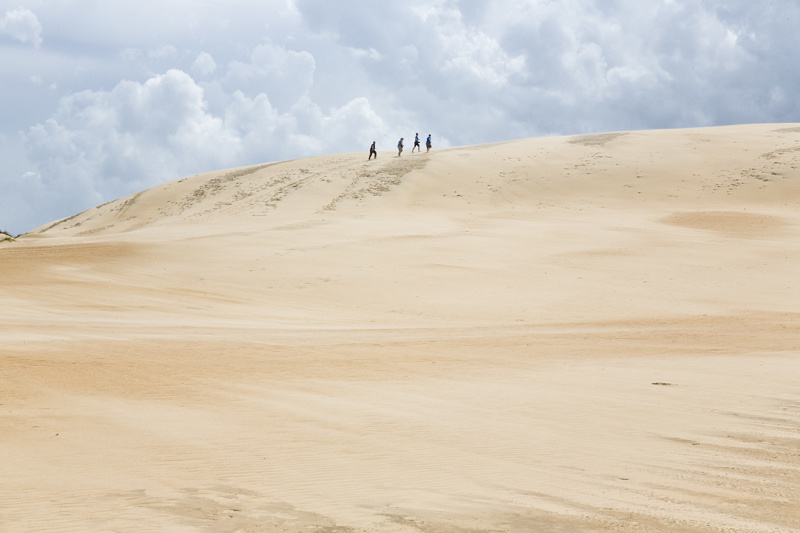 Posted by Fran (Trumbull CT, United States) on 31 May 2018 in Landscape & Rural and Portfolio.

Intrepid climbers reach the summit of the highest sand dune in Jockey's Ridge State Park in Kill Devil Hills, Outer Banks, North Carolina. This most popular park in NC features a system of sand dunes reaching 80-100 feet tall, the tallest dunes in the eastern United States (Namibia has nothing to worry about!!!). It is speculated that the park's name derived from early settlers' practice of capturing and racing the wild Spanish mustangs that came ashore from ship wrecks of early explorers and racing them in the flat area at the base of the dunes, while spectators sat on the high dunes which formed the grandstand. In the 1970s the dunes were being bulldozed to make room for housing developments. A local family headed by Carolista Baum formed a committee to save the dunes and thanks to their efforts, in 1975 funds were set aside to form the park which today comprises 420 acres. It is a popular destination for sand boarding and hang gliding.

A wonderful image! I remember this when I visited there years ago. I love the dramatic clouds. Would love to go back there one of these days!

@Elaine Hancock: It's a tough hike!!!

@Darkelf Photography: Thank you.Lots of blowing sand in the wind too. Lucky I didn't damage my lens.

An invigorating moment for sure . .

@Ronnie 2¢: A tough hike and lots of blowing sand but a fun place.